Watershed segmentation in MIPAV is an interactive algorithm that allows automatically segment the image regions of interest. The watershed transformation performs gray scale segmentation using the topographical approach. Interpreting an image as a topographical relief, the algorithm performs flooding starting from regional minima, which are seen as plateaus of constant altitude surrounded only by pixels of higher gray levels. Dams or watershed lines are built when pixels from different basins meet or when the pixel's gray level reaches a certain threshold value which represents the image's background.

Note: The order in which VOIs are defined on the image is important. The first VOI must always outline background pixels.

Watershed algorithm: (a) - the original image with two VOIs: the VOI1 highlights the image background and VOI2 is a group of three VOI delineated inside the objects we wish to segment

(b) this figure illustrates the main steps of the algorithm

To overcome that problem the following techniques are used in this implementation of the algorithm:

You can apply this algorithm to 2D and 3D gray-scale images. 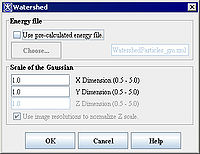 Use pre-calculated energy file - when you run the algorithm for the same image next time you have an option to open and use the previously saved energy file for your segmentation.

OK - applies the Watershed algorithm according to the specifications in this dialog box.

Cancel - disregards any changes that you made in the dialog box and closes this dialog box.

Before applying the algorithm,

To run the algorithm

The following sources were used to create this help.