Internally, MIPAV is designed to store images of any dimensionality and thus is n dimensional. Figure 1 is a model of an example 3D-image where each position within the grid represents a voxel.
voxel-The smallest distinguishable cube-shaped part of a 3D-image.


The voxel in the upper left-most position is considered the origin of the dataset. (A volumetric dataset is a set of cross-sectional images). Ideally, each voxel would be isotropic (i.e., cubic), but clinical datasets are often acquired in such a manner that the resolution in the x and y dimensions is greater than the resolution in the z dimension, thus producing rectangular voxels (elongated in the z. This voxel anisotropy is taken into account in the execution of the algorithms found in MIPAV.

When recorded in scanner or image order, multi-component images are stored as consecutive volumes. This is convenient for visualization, since one can easily render a particular 3D volume, however, it is inconvenient for parallel processing, as one must read the entire 4D image in order to get the specific component(s) for a particular processing.

A data type is the classification of a particular type of information. For example, a floating point data type indicates a number with a decimal point. Data read from image files are stored in MIPAV's data structures. MIPAV supports all the basic data types shown in Table 1 and may in the future support more composite data types including color and complex numbers. The image data read from the file is stored in a data buffer of the same basic data type, preventing the reduction of image information that results from conversion into a fixed data type.

(a) the Info dialog box for DICOM images 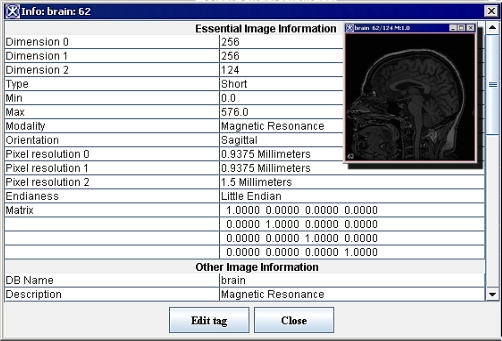 (b) the Info dialog box for non-DICOM images

You can edit some of the image attributes for both DICOM datasets and non-DICOM datasets in the Image Attributes dialog box (Figure 3). The Image Attributes dialog box includes five tabbed pages, which are the following:
General page displays the name of the image (without its extension, or suffix) and lists the image modality
Resolutions page indicates the unit of measure for each dimension
Orientations/Origin page lists the image orientations
Transform Matrix displays and lists the values for the transform matrix
Talairach displays Talairach transform