This page contains instructions on how to perform MRI prostate segmentation and surface reconstruction in MIPAV. The algorithm facilities the validation of multi-parametric MRI with histopathology slides from radical prostatectomy specimens and targeted biopsy specimens. It employs the technique that combines image processing and computer aided design to construct a high resolution 3D prostate surface from MRI images in three orthogonal views with non-isotropic voxel resolution.

The algorithm outline is shown below, refer to (Applying the algorithm.

The algorithm could be applied to the following image types (TBD). In order to use the segmentation tool, the image dataset must contain 3 orthogonal images centered at prostate center, similar to ones in the sample image dataset available for download via this link.

The center of the prostate is the focal point for the MRI scan. To reduce the scan time, a lower refocusing pulse of 100 degrees was used for sagittal and coronal images, which alters the contrast on these images compared to the axial images.

If you are working with DICOM images, convert DICOM images into MIPAV XML format, first. In order to do that,

Naming conventions: When you convert a DICOM image to a MIPAV XML image, we advise you to use the following file names: image_ax_83.xml, image_sag_83.xml, image_cor_83.xml. The ax, sag, and cor suffixes are used to specify axial, sagittal, and coronal images correspondingly. These are names used in the the sample image dataset. And these are file names used in this instruction.

To open an axial image, use File > Open image (A) from disk menu. If you are using the sample image dataset provided, open the img_ax_83.xml file.

To delineate prostate VOIs, use the Polygon/Polyline VOI tool

from the MIPAV toolbar.

For example, if you work with the sample image dataset:

Smoothing VOIs. After delineating VOIs, we need to smooth each VOI. In order to do this, select each VOI and call the Smooth VOI dialog box. The dialog is available from the main MIPAV menu (VOI > Smooth VOI).

In the Smooth VOI dialog box, check the "Replace Original Contour" box, and set "Number of interpolation points" to 100. Click OK. Repeat for all 3 contours.

In the sample image dataset provided, VOIs files are already available for all 3 types of images (axial, saggital and coronal). Under the image dataset directory, one can find 3 orthogonal images and corresponding VOIs:

Note: The VOIs from the sample image dataset were drawn by clinical researchers, and verified by radiologist expert at NCI. For experimental purposes, we could recommend performing quick VOIs copying instead of manually drawing all three VOIs for all 3 image files. 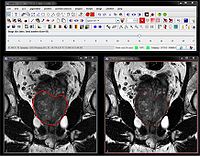 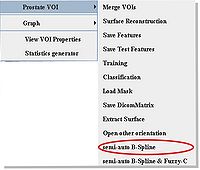 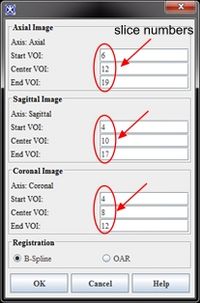 Note that the drawn VOIs slice numbers are automatically populated in the dialog box. 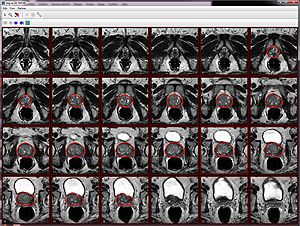 For each named VOIs based mask, the console window shows the number of voxels and volume. Created VOIs are used for the surface reconstruction step. Each VOI contour has 100 points.

To save each new segmented VOI, select the VOI first, and then call the Save VOI dialog box.

To avoid confusions save these VOIs separately as _new.xml files. You can consider using the following naming convention for the axial, sagittal, and coronal VOIs respectively: voi_ax_new.xml, voi_sag_new.xml and voi_cor_new.xml

To form a cloud points set used for surface reconstruction, we need to merge 3 VOIs (axial, coronal and sagittal) in DICOM space.

We provide a unified dialog to use the Ball-Pivoting and Poisson surface reconstruction algorithms to build the smooth 3D surface with the generated point cloud dataset. 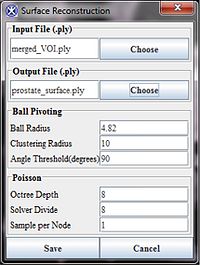 To run the Surface Reconstruction algorithm:

The coarse surface output file is generated after running the Ball-Pivoting algorithm. The surface is constructed with many holes left. The Poisson algorithm takes the coarse surface as an input, and finishes up with a final smoothed prostate surface.

In order to save the DICOM matrix:

- To run MIPAV GPU Renderer, click the GPU based Volume Renderer icon on MIPAV toolbar. The MIPAV GPU Visualization window appears (see a in the figure below).

The uploaded surface contains 7362 triangles. For the final 3D prostate mold printing, this number is too big. We need to decimate the surface to a smaller number of triangles, and make the triangle meshes printable with Solidworks 3D CAD software.

To decimate the surface

To quantitatively evaluate the performance of the semi-automatic segmentation algorithm, comparison based on VOIs binary mask, VOIs volume and 3D prostate surface volume are conducted.

The expert drawn VOIs files are provided in the sample image dataset. To compare the image wise segmentation quality, we simply add the expert drawn VOI file into the segmented result image.
Retrieved from "http://mipav.cit.nih.gov/pubwiki/index.php?title=Prostate_segmentation_and_surface_reconstruction&oldid=46522"
Categories: