Screening for low macular pigment (MP) and monitoring supplementation requires robust methods to estimate the optical density of the MP. The method includes the measurements of MP that are performed by analysis of autofluorescence (AF) images and building the MP maps.

The technique, which is implemented in the MIPAV "NEI Build MP maps" plug in, uses AF images with two excitation wavelengths (yellow and blue) to calculate the MP optical density distributions over a central eight fifteen degrees diameter area radius centered on the fovea (in this plugin defined to be the center of mass of macular pigment optical density within the selected VOI, in typical cases of centro-symmetric pigment distributions, this corresponds to the maximum value of pigment that is anatomically typically at the center of the fovea (TBD).

The algorithm takes as an input two groups of retinal images acquired at two different excitation wavelengths, and creates MP maps that show the distribution of macular pigment over the retina. The input images are obtained with a standard Fundus camera for retinal photography, equipped with an autofluorescence modality. Images are captured using different wavelength filters - yellow and blue (defined in Appendix I, TBD) and have a fixed black background. It is important for the user to know the weighted average of the normalized macular pigment absorption coefficient in the excitation.

Outline of the method

In order to perform analysis on any retinal images, the pixel intensities on the spatial domain of the image must correlate to the actual physical domain on the participant's eye.

Because of the acquisition process, very often retinal images are non-uniformly illuminated, and therefore exhibit local luminosity and contrast variability. This may seriously affect the algorithm performance and its outcome. To contest the pigment's light absorption, images from the "blue" and "yellow" groups and a reference image are, first, processed to emphasize vascular regions, and then, registered using vascular structures as reference points. To accentuate vascular regions, the algorithm applies gradient magnitude combined with Gaussian (with a scale of 6 by 6) to "blue" and "yellow" images and to the reference image.

Removing the black border from images 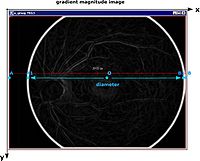 Removing the black border from the GM image: A1 and B1 are the far left and right non border pixels, O is the center pixel

To extract the eyeball part of the image for registration, the algorithm removes the black border from the gradient magnitude (GM) images using the following technique:

To measure the optical density of the MP, the autofluorescence (AF) method uses two excitation wavelengths (blue and yellow) that are differentially absorbed by the MP, accounting thereby for the non-uniform distribution of lipofuscin in the retinal pigment epithelium (RPE).

The algorithm calculates the distribution of the optical density of MP based on the following theory:

In equation 1, absorbers other than the MP and fluorophores other than RPE lipofuscin are neglected to simplify the process. Typically, contributions from rhodopsin absorption will confound these measurements. In typical Fundus camera measurements, rhodopsin is bleached within the first flash and so does not affect the measurement. When using varying flashes and sensitivities, it is a good idea to verify that the intensity of the AF image is at steady state, i.e., rhodopsin is bleached.

Note that in practical situations, neither the intensity of light incident on the retina, nor the detection sensitivity is known as they depend upon many factors. Therefore, equation 1 is applied to a reference location P, generally located in the periphery of the field.

Note that in practical situations, neither the intensity of light incident on the retina, nor the detection sensitivity is known as they depend upon many factors. Therefore, equation 1 is applied to a reference location P, generally located in the periphery of the field.

A ratio of two versions of equation 1 applied for two locations F and P creates the following equation 2:

A ratio of two versions of equation 2 applied for two locations F and P creates the following equation 3:

Since the optical density of the MP is generally expressed at its wavelength of maximum absorption which is 460 nm; therefore,

equation 5 after several substitutions, elimination of Io and logarithmic transformation appears as:

dDFP(460) is the optical density difference between a field location F and the reference location P, log (FF(Lambda)/ FP(Lambda) is an unknown constant.

variables epsBlue and epsYellow are used for relative extinction coefficients Kmp for blue and yellow light (in the case of broad band excitation, they are weighted by the spectrum of the excitation light, see Appendix I, TBD);

You can apply this algorithm particularly to 2D retinal images. 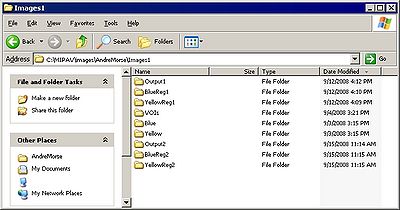 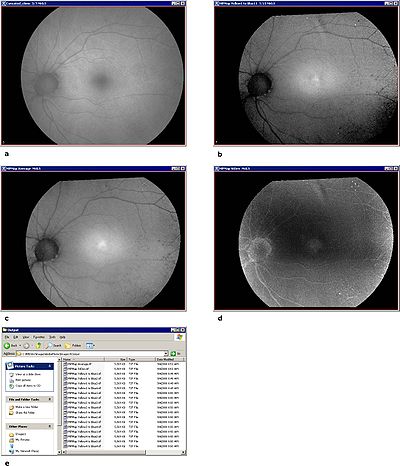 To run the plug in, complete the following steps:

The algorithm begins to run and the list of steps performed appears in the algorithm's window. When the algorithm finishes running, the following new catalogs appear in the images directory:

Where "N" is the number of the plugin's run.

If you are running the plug in for the first time, it will create the following directories: BlueReg1, YellowReg1, and Output1;

If you are running the plug in for the second time over the same set of images, it will create the following directories: BlueReg2, YellowReg2, and Output2. 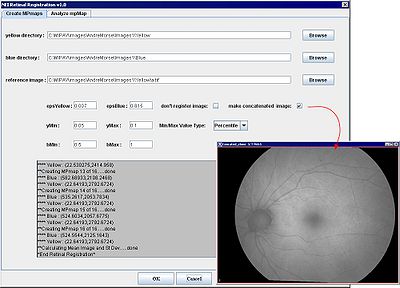 The tab options are as follows:

Yellow directory - use this box to select the directory where "yellow" images are stored;

Blue directory - use this box to select the directory where "blue" images are stored;

epsBlue and epsYellow are parameters that used for relative extinction coefficients Kmp for blue and yellow light, refer to Building the MP map. The entered values should be in the range (0, 1). For the first run, use 0.007 for epsYellow and 0.815 for epsBlue (see Appendix I, TBD);

bMax is the maximum intensity value in the "blue" image;

yMax is the maximum intensity value in the "yellow" image;

bMin is the minimum intensity value in the "blue" image;

yMin is the minimum intensity value in the "yellow" image;

Don't register the image - if this option is selected, the plug in doesn't run the registration algorithm;

Min/Max value type (percentile or intensity) - use this list box to select the type of values for yMin, yMax, bMin, and bMax.

To run the MP map analysis algorithm, do the following:

Before running the MP map analysis algorithm, do the following:

The algorithm begins to run and the steps performed appear in the plug in's output window. When the algorithm finishes running, the result file appears in the OutputN directory. 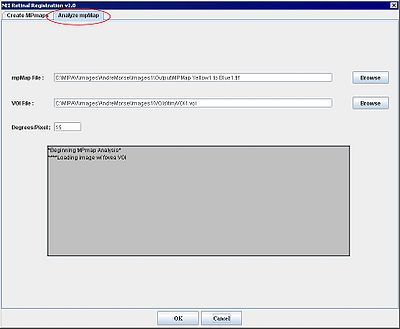 The tab options are as follows, see Figure on your right:

Any constrains on this value?