As an option, you may choose to perform registration before running the FRAP algorithm. During the registration, MIPAV registers slices to the first slice after photobleaching. Although the default cost function is correlation ratio, you can select instead least squares, normalized cross correlation, or normalized mutual information. By default the registered image appears in a frame.

The algorithm uses only one color in a color image. If a color image is registered, the registration is based only on this selected color, but all colors in the registered image undergo the same transformation.

For images that have a photobleached narrow band with two neighboring unbleached regions, MIPAV uses the equations described in Using FRAP and Mathematical Modeling to Determine the In Vivo Kinetics of Nuclear Proteins by Carrero, McDonald, et al. (refer to "References"). Similar equations were derived for images that have a photobleached circle inside an unbleached region, and solutions were also implemented for the pure 1D diffusion case and for the single exponential model.

To perform FRAP on an image, you select Algorithms >Microscopy >FRAP. The Fluorescence Recovery after Photobleaching dialog box appears. The first task is to delineate the following VOIs on the image:

In delineating VOIs for FRAP, it is not necessary to select the New VOI icon. The procedure is to simply select the Add required photobleached VOI option on the FRAP dialog box and then, after selecting an Ellipse, Rectangle, Polyline, or Levelset icon in the VOI toolbar in the MIPAV window, draw the VOI on the image. The required photobleached VOI appears in red on the image.

As an option, you can create a third VOI by selecting Add optional background VOI on the FRAP dialog box and repeating the previous steps for drawing the VOI, which appears in blue, on the image.

Even with low illumination during the recovery phase, fluorescence loss through photobleaching is expected to occur over the course of the recovery curve. For this loss the time that matters is the exposure time for each slice picture and not the absolute time at which the exposure was made. Since the exposure time for each slice is the same, the time here is proportional to the number of slices. The background corrected photobleached values are divided by the background corrected whole organ values to correct for this loss of fluroescence.

The mobile fraction equals bottom span. In this curve fitting the time used is the time elapsed since photobleaching. Alpha, beta, gamma, and the ratio of the whole organ region fluorescence after bleaching to before bleaching are output. The dissociation rate, the association rate, and the diffusion transfer coefficient are obtained from alpha, beta, gamma, and the afterBeforeRatio.

You can select an optional check box on the FRAP dialog box to double check the Gauss-Newton nonlinear fitting results with a simple grid search pattern. The software calculates the Sum of Squares of Errors (SSE) at every legal point on a grid and then finds the sum of the squares of the fitted photobleached data minus the actual photobleached data for every slice starting with the first slice after photobleaching.

The algorithm finds the global SSE minimum and, if present, any local SSE minimums, which are the lowest point in a 5 by 5 by 5 cube. The 3D space is searched with the restriction that beta <= alpha. Points with beta > alpha are not included in the 3D search and are simply filled in with SSE values equal to 1.1 times the SSE maximum found over the permissible space. The search is conducted with the bottom and span values kept fixed at the values found by the nonlinear fit. Since these values are very likely to have been accurately determined, this should not be a problem. In any event a search over a 5D space would be very time consuming. A 201 by 201 by 101 3D error image is created to display the calculated SSE values. The error image name is the source image name with _err appended on the end.

Point VOIs appear at the locations of the global minimum and at local minimums if any exist. The algorithm stores point VOIs in a folder titled defaultVOI_sourceImageName_err. For the pure 1D fit and the single exponential fit, the search is simply one dimensional; therefore, the software does not create an error image. For the pure 1D fit, <math> 201 \frac {D_{eff}} {w^2} </math> values going from 0.05 times the nonlinear fit value to 20 times the nonlinear fit value are used to calculate SSE. For the single exponential fit,

In the derivation for the case in which the photobleached area is a circle, there are only two compartments:

This gives the equation:

Using D1 D2 = D, the above equation factors as:

The quadratic gives the roots alpha and beta with

Let the vector C be

Remembering that <math> u_0 </math> is the vector of initial conditions, we wish to solve: 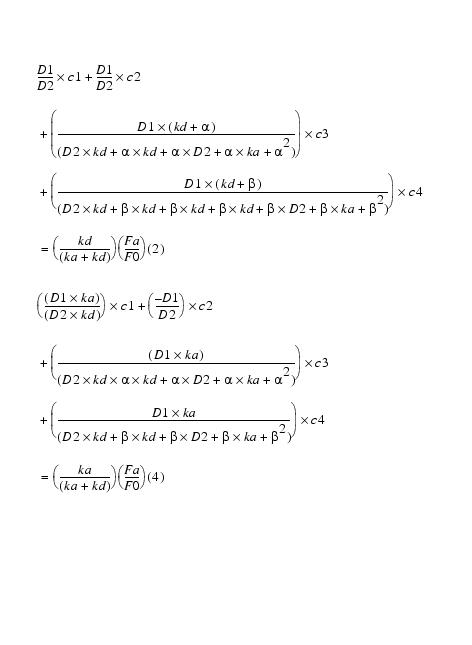 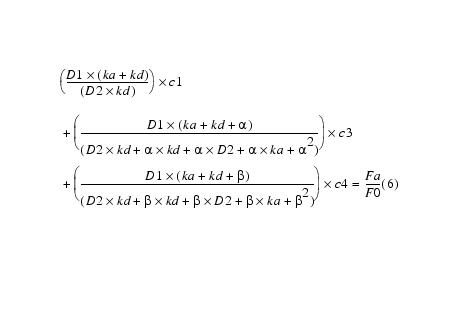 and adding to 6 yields:

and adding to equation 2 yields:

and adding to equation 7 yields:

Putting c3 and c4 in equation 5 and solving for c1 yields:

Thus, the solution is:

The above equation is normalized by dividing by

and the normalized equation can be written as:

You can apply this algorithm to both color and black-and-white 3D images. However, with color images, the algorithm uses only one of the colors.

This section explains how to run the FRAP algorithm and how to modify the appearance of the resulting graph windows.

To run the FRAP algorithm

If you selected Create registration image in the FRAP dialog box, an image window with a registered source image appears.

If you selected Grid search with parameter variation in the FRAP dialog box and either 2D narrow band or 2D circle, a 201 by 201 by 101 3D error image is created to display the sum of squared error values.

In a graph window: