Because MIPAV is Java-based, it can run on many different platforms, such as Windows (Vista, XP, NT, 95, 98, and 2000), Solaris, Linux, UNIX, Macintosh, and SGI workstation.

MIPAV runs optimally on a system with Pentium III 400-megahertz (MHz) processor. Although MIPAV can run on a computer with a slower processor speed, for peak performance a processor that is equivalent to or faster than Pentium III 400 MHz is recommended.

A minimum of 25 MB free hard disk space plus an additional image file storage space - MIPAV software components require 25 MB of hard disk space for storage. If you plan to store image files on your hard disk, you need to allocate more space.

GPU computing is the use of a graphics processing unit (GPU) as a co-processor to accelerate CPUs for image processing, scientific, and engineering computing. The GPU accelerates applications by taking some of the compute-intensive and time consuming portions of the code from the CPU and running it itself. In that case both GPU and CPU share the same code execution. As a result, the application runs faster because in addition to CPU it also uses the massively parallel processing power of the GPU. This is also known as “heterogeneous” or “hybrid” computing or GP-GPU computing.

Normally, a CPU consists of four to eight cores, while the GPU consists of hundreds of smaller cores. When used together, they provide a higher computational performance, which is important for medical image analysis. 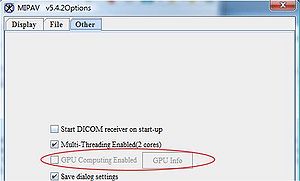 In order to run MIPAV GPU based Volume Renderer, an NVIDIA video card and the proper video card driver need to be installed:

Note: if the GPU Computing Enabled option is grayed out in the MIPAV Options - Other dialog box, that means that either a video card driver or a video card needs an upgrade, or they both need it.

Minimal requirements: MIPAV requires a base of 35 MB of RAM. However, when you open an image file, MIPAV requires additional memory to correctly display the file and quantify data.

To more precisely determine the amount of memory that you need, estimate the number of files you generally have open at one time. Next, add the sizes of the files together and multiply the result by 10.


During a typical MIPAV session, you might generally compare and contrast three image files. The estimated file sizes may be 2 MB, 4.5 MB, and 6 MB. The calculation would be: 10(2 8.5 10) 35 = 240. Thus, in this scenario, you need 240 MB of a combination of RAM and virtual memory to run MIPAV and visualize the three image files. Note that for DICOM datasets you must add all of the files in the dataset, even if you only work with one or two images.


If you need to allocate more than 100MB of memory, after you install MIPAV you need to adjust the memory allocation settings.