How do I save images in a different format?

Since MIPAV supports read and write access in a number of different file formats and can read still others. There are some MIPAV-only features, for example, allowing users to recover particular volumes of interest. MIPAV can save and later restore important data. Not only does MIPAV support a number of medical image data formats, but it also supports some general purpose formats, which are very help in making presentations.

When you save an image after working on it in MIPAV, make sure to type the correct extension at the end of the file name to save the image in the correct format.

Example. If you are saving a DICOM image named Head101, type .dcm or .ima as the extension so that the name of the file is Head101.dcm.

For your convenience, you can search for image file types by either manufacturer or file extension.

What is Image A and Image B?

In MIPAV, the first image opened in an image window is referred to as Image A. When you load, or import, a second image in the same window, MIPAV refers to the second image as Image B.

How do I combine two images for alphablending?

Alphablending is a technique that adds transparency information to translucent objects. When two images share a window, you can adjust the alphablending settings so that you can see a blend of both images and can compare overlapping regions in two datasets. See also Comparing images using alphablending and Opening and loading image files. 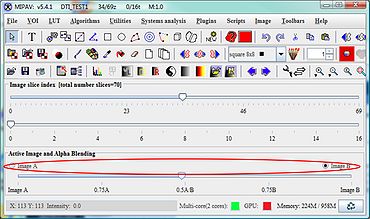 Opening Image A and Image B. Alphablending slider

To use the alphablending function you need to open two or more images. In order to do that:

Next: FAQ: Understanding Changes in MIPAV