In the default view, MIPAV displays the images in a dataset one at a time in an image window. This window can display datasets of any dimension.

A view refers to the way an image file is displayed. A view indicates how many images are shown at one time and whether images are advanced manually or automatically. Depending on the view, the size and shape of the image window in which an image is displayed can vary. 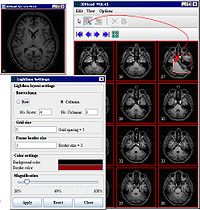 The lightbox view is similar to the default view, except that all images in the dataset appear in one window at the same time.

To display images in the lightbox view:

To magnify a portion of the image in the lightbox:

Click Magnify Region and move the pointer to the image section to be magnified. Click Default Mode when finished. Double-clicking an image in the lightbox view updates the 2D image frame for that image.

When you view an image file in cine view, MIPAV automatically advances images one frame at a time. The effect is much like a film loop.

To display images in cine view

Restoring the original level of magnification

To return the image to its original size or original level of magnification, click Original Magnification.

The Magnify Region icon allows you to view a square portion, or region, of the image at a specific magnification level. If you have loaded two images</font> into the same image window, the Window Region of Image B icon appears on the toolbar. Use this icon to view a region on the second image, or Image B. 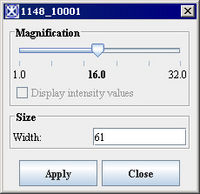 To use Magnify Region

As you move the mouse over the image, the Magnify Region icon displays a magnified square region in the image in a red box. The number at the left corner of the square is the magnification level.

Tip: To review or compare a magnified region of the image with the same region at its original magnification, press Shift. To return to the Magnified view, release the key.

To change the magnification level 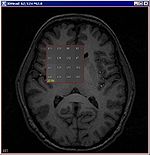 To show the intensity values:

Tip: If you hold down the middle mouse button, MIPAV writes the intensities by position within the image to the Data page of the Output window. You can then save these messages and print them.

Images before and after applying Quick LUT

Histogram- is a representation of a frequency distribution by means of rectangles whose widths represent class intervals and whose areas are proportional to the corresponding frequencies.

Lookup table (LUT)- maps the frequency distribution in a histogram to pseudo-color values.

An easy way to improve the contrast in an image is by using the Quick LUT icon, which is located on the image toolbar in the expanded MIPAV window.

To use Quick LUT:

Repeat steps 3 through 5 as often as you wish to further improve image contrast. When you are satisfied with the contrast, save the image.