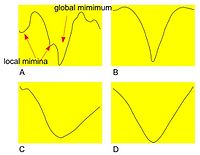 The plots of the Correlation Ratio cost function versus some of the individual parameter values. In each plot (A, B, C, and D), a single parameter is varied while the other are kept constant

For the registration algorithms, such as OAR, the main approach for determining an optimal transformation is to

The following figure (right) shows a plot of a sample cost function for a selection of transformation parameters.

The cost functions implemented in MIPAV:

Given two images I and R, the basic principle of the Correlation Ratio method is to search for a spatial transformation T and an intensity mapping f such that, by displacing R and remapping its intensities, the resulting image f(R* T) be as similar as possible to I. This could be achieved by minimizing the following correlation ratio function:

which integrates over the voxel positions <math>x_k</math> in the image I.

Though, application of a discrete laplacian kernel to a digital image produces very few zero-valued pixels. Rather, a zero-crossing is represented by two neighboring pixels that change from positive to negative values. Of these two neighboring pixels, the one closest to zero is used to represent the zero-crossing. The resulting feature cost contains single-pixel wide cost "canyons" used for boundary localization.

Gradient Magnitude provides a direct correlation between the edge strength and local cost. If <math>I_x</math> and <math>I_y</math> represent the partials of an image I in X and Y directions respectively, then the gradient magnitude G is approximated with the following formula:

The gradient is then scaled and inverted, so high gradients produce low costs and vice-versa. Thus, the gradient component function is

Least squares measures the average of the squared difference in image intensities.

It can be divided by count to normalize the cost function or make it invariant to the number of voxels in the region of overlap. If two images show large differences in image intensity, then we recommend using Scaled Least Squares with a global scaling term added:

It can be shown that Least Squares is the optimum cost function when two images only differ by Gaussian noise. Images in two different modalities, such as PET and MRI, will never differ by only Gaussian noise. Even two images in the same modality, such as two PET images, will seldom only differ by Gaussian noise as medical scan noise is frequently not Gaussian and because the object often changes between the image acquisitions. The effectiveness of this cost function will be greatly diminished by small numbers of voxels having large intensity differences.

The Cross-Correlation function can be defined as

The summation is taken over the region (s,t) where R and I overlap. For any value of (s,t) inside R(x,y) the cross-correlation function yields one value of CrossCorr. The maximum value of CrossCorr(s,t) indicates the position where I(x,y) best matches R(x,y).

Normalized Cross Correlation is 0 for identical images and approaches 1 for images that are very different.

Mutual information (MI) measures how well one image explains the other. In medical image processing, MI is often used as

The mutual information of random variables A and B is defined as:

Where H(A) and H(B) are the Shannon entropy of image A and B respectively, computed based on the probability distributions of their grey values. And H(A,B) denotes the conditional entropy, which is based on the conditional probabilities p(a |b) - the chance of grey value a in image A given that the corresponding voxel in B has grey value b. MI measures the distance between the joint distributions of the images' gray values p(a,b) and the distribution when assume that images are independent from each other.