The Correct Image Spacing command on the Utilities menu corrects images in which slice thickness and slice spacing are unequal, which may distort images. To understand how this problem can occur, the following section presents some background information.


Since all slices within an image volume must have the same slice thickness, in many cases more than one slice must be inserted and the original images must be repeated so that a new value can be found for the slice thickness that fits evenly into the original slice spacing. Since there are an infinite number of combinations of slice spacing and thickness, not all could be handled. Table 2 displays the most common combinations and the algorithms MIPAV uses for handling them.


You can also find this information listed in the Essential Image Information section of the image header (Figure 13) as Pixel resolution 2 (i.e., slice thickness) and Slice Spacing.

To view and edit image attributes 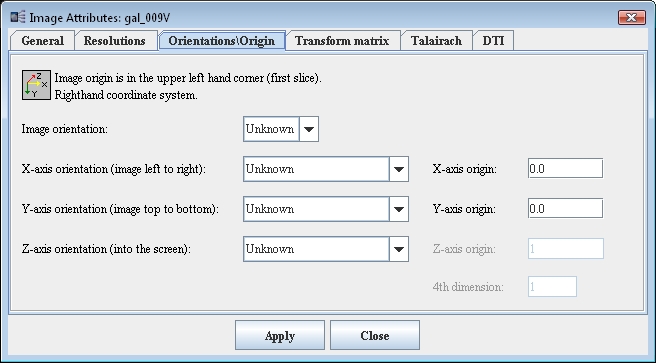 To save DICOM images as XML files

The Correct Image Spacing utility works only on XML files.
1 Open the DICOM image.
2 Select File > Save Image as in the MIPAV window. The Open dialog box appears.
3 Type the name for the file including the XML extension in File Name.
4 The Select DICOM tags to convert to XML dialog box opens.
5 In the left dialog box window, select tags which you would like to convert to XML. Use the CTRL right mouse button combination of keys to select multiple tags. Then, use the arrows to move selected tags to the right window. See Figure 14 for more information.
6 Press Save to save the file.

To save other images as XML files

The Correct Image Spacing utility works only on XML files.
1 Open the image that has spacing problems if you have not already done so.
2 Select File > Save Image as in the MIPAV window. The Open dialog box appears.
3 Type the name for the file including the XML extension in File Name.
4 Select Medical, which includes XML files, in Files of Type.
5 Click OK. The Save Range of Slices dialog box appears. Complete the dialog box and press OK. See Figure 15.
6 The program saves the image as an XML file.