There are several ways of changing the image contrast in MIPAV: 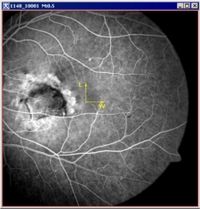 The right mouse button provides a very simple way of changing image contrast. To do so, open an image and then hold down the right mouse button and drag it around the screen. The cursor changes from a red cross to one that is shown in Figure 23. To restore an image to its original appearance, refer to Restoring images to their original appearance.

When you drag the cursor up and down or across the image, the image may become darker and gradually disappear or become lighter in appearance. At some points you may be able to create a negative of the image.

The image transformation function used in a gray-scale lookup table

Three examples of 8-bit gray-scale LUT transform functions, (a) a one-to-one transformation mapping the intensity range [0-255] to [0-255]. (b) A linear LUT function highlighting only pixels lying within the range [74-197], (c) A non-linear gamma transformation function 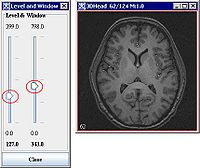 The Level and Window dialog box

The basic concept that lays behind the window/level concept is to apply a linear gray-scale transform function, in the form of a lookup table (LUT) specified by these two parameters - window and level. These two parameters defined a specific subset (or range) of pixel intensities to be displayed. The end result after applying window/level function is that pixel intensities corresponding to the defined subset of the entire dynamic range are highlighted, while pixel intensities that are falling outside the specified range are changed to be within that range.

In the LUT processing technique each pixel in the input image is mapped to the corresponding pixel in the output image, with the new pixel intensity taking on a value specified by the chosen LUT.

One way of specifying a linear gray-scale transform function is to define 2 parameters:

Holding the window constant while adjusting the level has the effect of moving the non-zero slope portion of the transform to the left or to the right.

The Adjust Window and Level icon on the Image toolbar provides another way to change the contrast of images.

The Level and Window dialog box

Move each slider up or down to change the contrast of the image. The changes are immediately effective in the image. 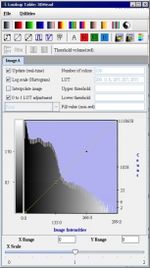 Look up tables (LUT) are data stored in the computer that is used to substitute new values for each pixel during the processing. LUT indicates the intensity of each voxel in the image and, in MIPAV, allows you to remap the original intensities to other intensities. LUT indicates what number is to be substituted for each pixel value during the processing of the image, however processing with this LUT does not change the image. One of the advantages of digital processing is that the processing parameters (factors) can be selected to produce images with different contrast characteristics. See also LUT Processing.

Transfer function reflects the relationship between the original image intensity values and how they are mapped into the LUT. The line in the LUT represents the transfer function.

To generate a histogram for an image:

To change back to the original grayscale intensities, click Gray LUT in the MIPAV window.

If you are zooming in on a portion of an image and want to reduce the appearance of pixilations in the image, make sure to select the Interpolate image check box. Interpolation smooths the pixilation.

To apply a pseudo-color LUT

To change back to the original grayscale intensities, click Gray LUT in the MIPAV window.

An image before and after inversion

To create a negative image

Based on the 256-step color values scale, MIPAV assigns the inverse value to each pixel of the image (refer to Figure 27).

Restoring images to their original appearance

To return to the original appearance of the image, click Reset LUT.

In addition, you can click the Gray icon to restore the image to grayscale if you have changed it or added colors.

Alphablending is a technique that adds transparency information to translucent objects. When two images share the same window such as when you are loading the image, you can adjust the alphablending settings so that you can see a blend of both images and can compare overlapping regions in two datasets. See also Opening and loading image files.

To use the alphablending function