Automatic de-Skulling provides tools that help anonymizing the 3D head image, so that the person cannot be recognized when displayed in a 2D-slice or 3D-volume view. This can be done as a progression from basic face-anonymizing, to de-skulling, to complete brain segmentation and extraction. Fully automatic brain segmentation and extraction is an area of on-going research.

Full-scale de-skulling requires removal of all skin, muscle, skull, eyes, exterior blood vessels, and nerve tissues. Brain segmentation goes further to define the exact components (white matter, gray matter, cerebellum, brain stem) to include in the final image. Although brain segmentation is not necessary to de-identify a face, several components of brain segmentation algorithms can be used as strategies for removing the identifying features of a face and a skull.

In this algorithm we decided to err on the side of leaving too much data rather than removing data that was part of the brain. One of the key steps in the algorithm is segmenting the white-matter of the brain,using a technique described in the Skull-Striping algorithm (Sadananthan, 2010). Given a good white-matter segmentation, the algorithm can reliability find a good skull segmentation without removing portions of the surface of the brain. A modified version of the Brain Extraction Tool (AlgorithmBrainExtractor) in MIPAV is then applied to further refine the brain surface.

The algorithm was designed based on works by Smith (2000) and Sadananthan (2010). See References for more papers.

The algorithm was tested on nearly two dozen images and on several examples of the different MRI modalities. The algorithm produced good segmentation for all the images except CT images. Refer to the Results section to view anonymization examples.

The goal for the Automatic de-Skulling algorithm

Is to produce fully anonymous results for

The algorithm performs the following steps:

Are derived from the image pre-processing steps described in the Extract Brain Surface tool (BET and BET2) (Smith, 2000). The preprocessed steps generate the center of gravity (COG) and cerebrospinal fluid (CSF) thresholds, which are used to find the initial white-matter seed point. Potential white matter seed points are limited to a radius around the COG. The minimum variance is selected from potential seed points with a maximum mean-intensity greater than the CSF threshold. These steps prevent the algorithm from finding a seed point in the background, where the variance may be zero but where the intensity is lower than the CSF threshold.

Were added to provide a buffer around the brain segmentation. This enables the algorithm to lose up on the side of removing too little data rather than removing small portions of the brain surface.

You can apply this algorithm to 3D MRI and CT images.

A significant challenge in creating the algorithm is the variety of input images and modalities. The algorithm works with 3D and 4D images of the following types:

Much of the reference work in brain segmentation is done on T1 or T2 images.

Examples of different image types are listed and shown in the Results section.

CSF is bright, muscles are darker and difficult to distinguish from the skull.

The major problem with segmenting CT images is that bone appears very bright, while CSF, white matter, and gray matter are hard to distinguish.

To run the algorithm,

Running the Automatic De-Skulling algorithm from the MIPAV menu

To run the algorithm with an atlas image,

To run the algorithm, do the following: 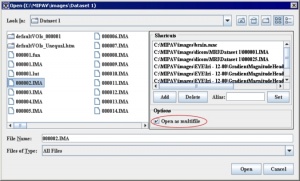 The Open as Multifile option

The algorithm begins to run. The atlas image appears in a new image window.

When the atlas image provided, the algorithm does the following:

The progress bar may slow down as it reaches 60%, just be patient, the algorithm is still working.